I’m going to have to start getting really creative for meals since my fridge is starting to look bare and I’m running out of pre-made frozen dinners (shocker!).

Last night I brought out a container of something called “Spaghetti Pie” from the freezer for dinner. Can’t tell you where it’s from (need to start making notes of this) but I can tell you that it tasted delicious! 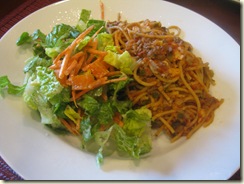 I used the last of the lettuce and Caesar dressing  that I had. Operation “Clean out the fridge before vacation” is in full effect.

This morning’s breakfast was a slice of toasted raisin bread with peanut butter and a grapefruit. 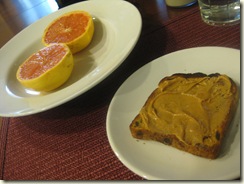 Grapefruits remind me of being a kid. My mom used to give them to me for breakfast. She had a special grapefruit knife that she would use to cut each segment perfectly so I could get them out easily. Then she would top each half with a bit of sugar.

I took my son to school and came home to get laundry started. Then it was off to Zumba. It felt so good to be back! I missed Zumba!

I scrounged through the the fridge for lunch. I made a pretty tasty lunch from what was left in there. 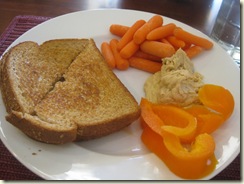 Then it was off to Target. After getting everything put away, it was time to pick up my son from school. On the way, I snacked on a Larabar. 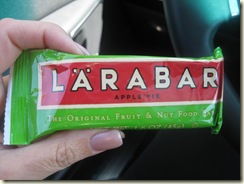 I took my son to his dentist appointment. He had to have a couple cavities filled. :( I’ve never had a cavity and I’m pretty good about flossing and brushing his teeth. Poor kid. He did awesome though!!! So proud of my little man!

Now we are home relaxing and trying to figure out what to have for dinner. I know I still have wine in the house……

Have you ever had cavities? Do you like going to the dentist?

If you could only eat at ONE restaurant forever, which one would it be?