I’ve had many of my favorite meals in the last several days. I mean, I have a ton of favorites but I’d say many of them are represented here!

After Bunco at Dina’s house, I took home some leftovers for dinner Wednesday night. 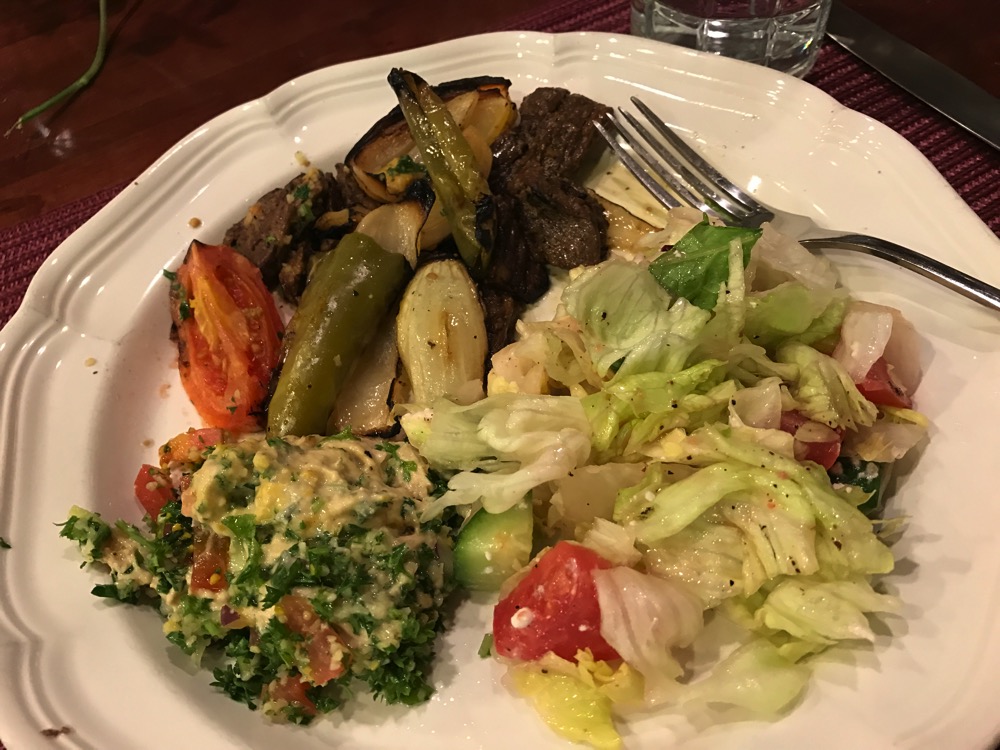 Kabobs, salad and hummus. Definitely favorites. After dinner, I took my son to his basketball game. 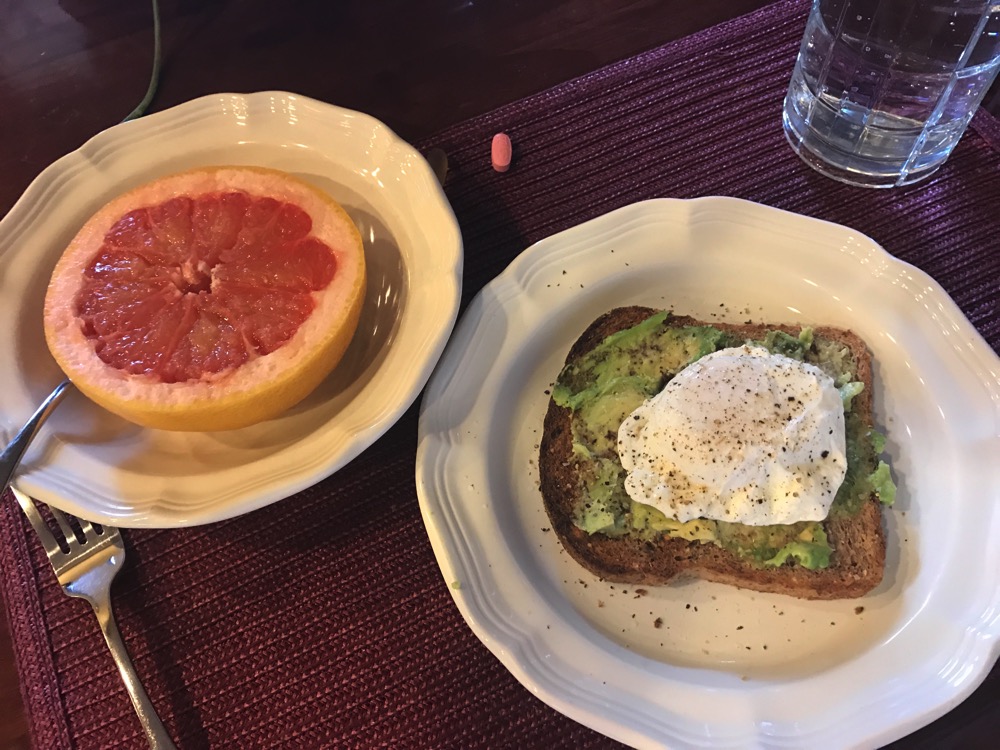 After I took the kids to school, I went to the gym followed by my tennis lesson.

I met some friends for lunch at Urban Plates which you know if definitely a favorite of mine! I usually go there once a week! 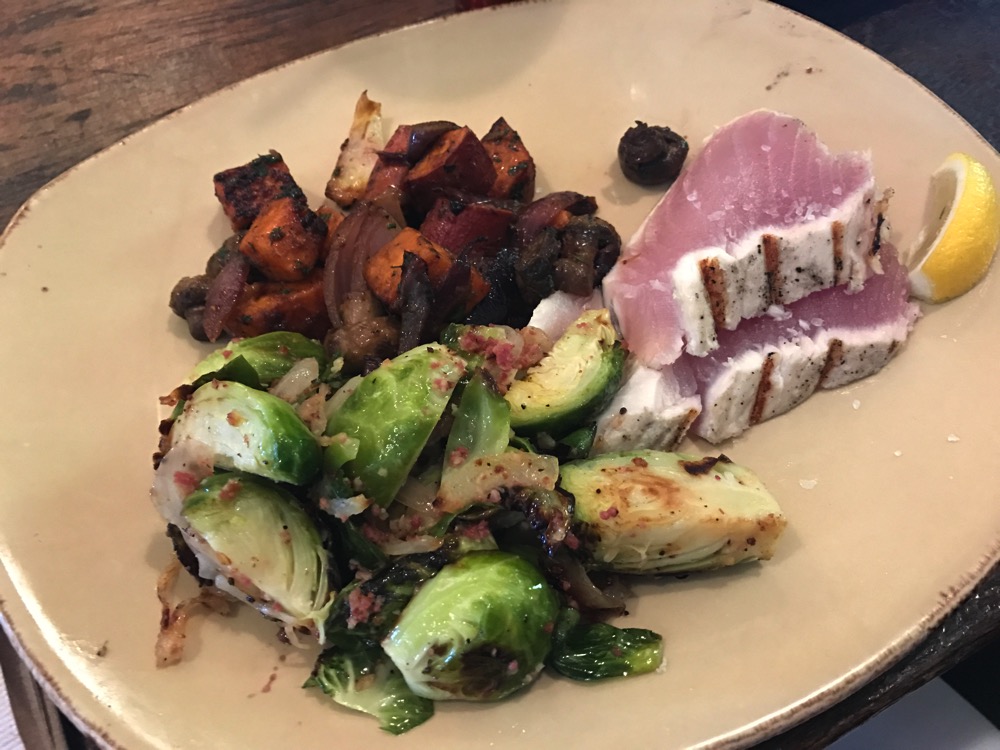 For dinner we went to my favorite Italian restaurant, Firenze. I had the Grilled Salmon. 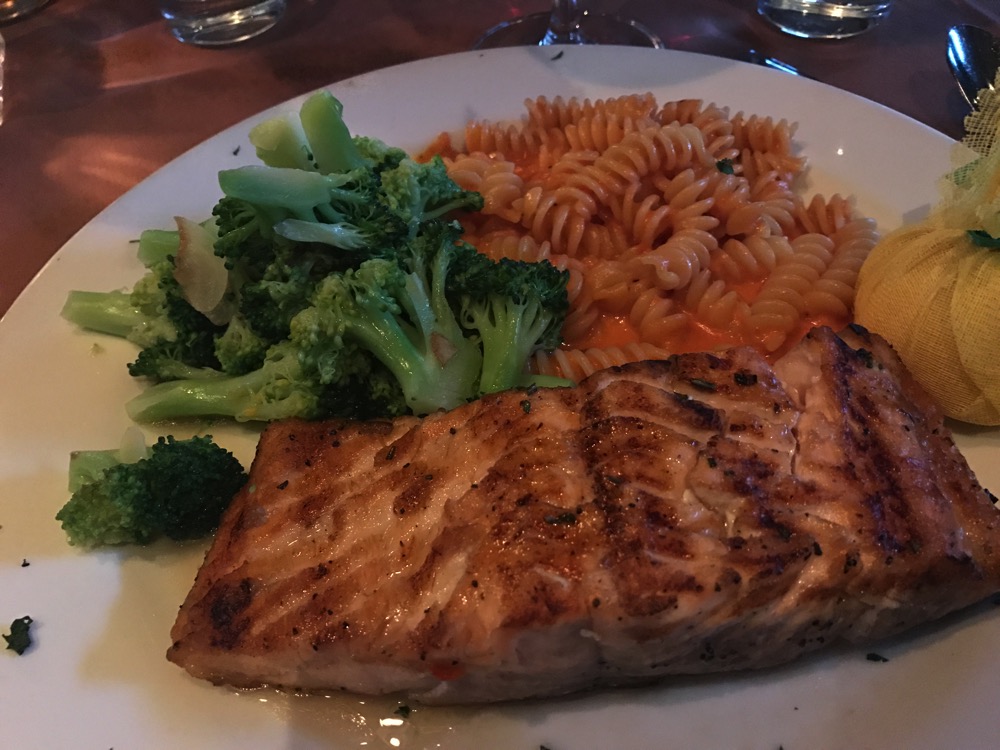 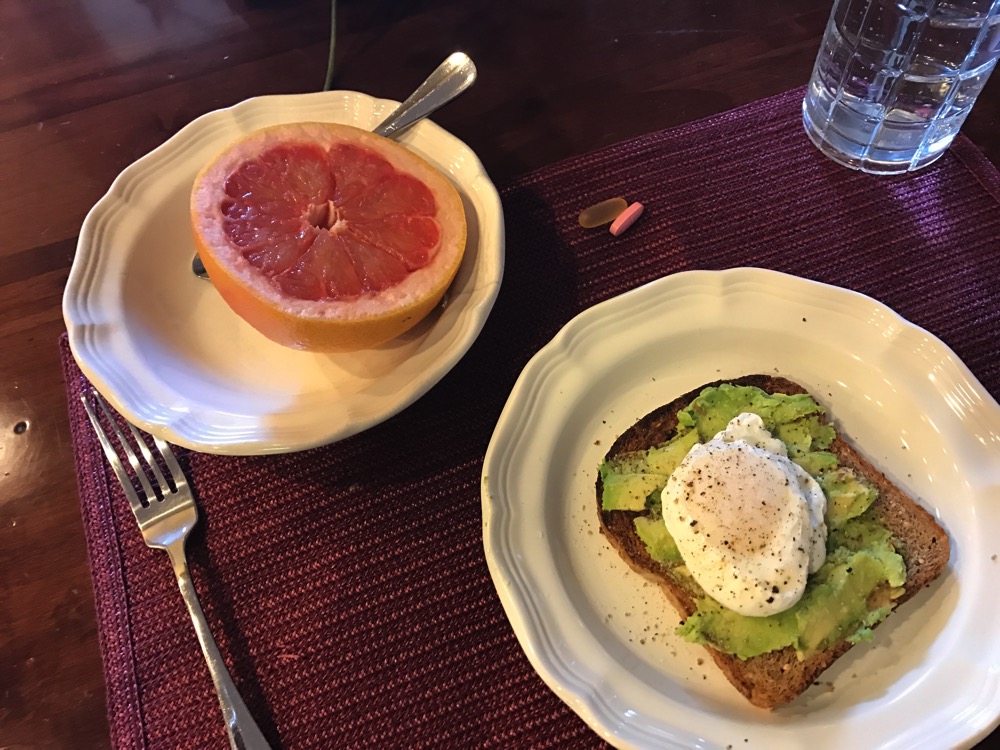 I went to the gym, then an appointment, then a bunch of errands. I met Alicia for lunch at Sushi on the Rock. 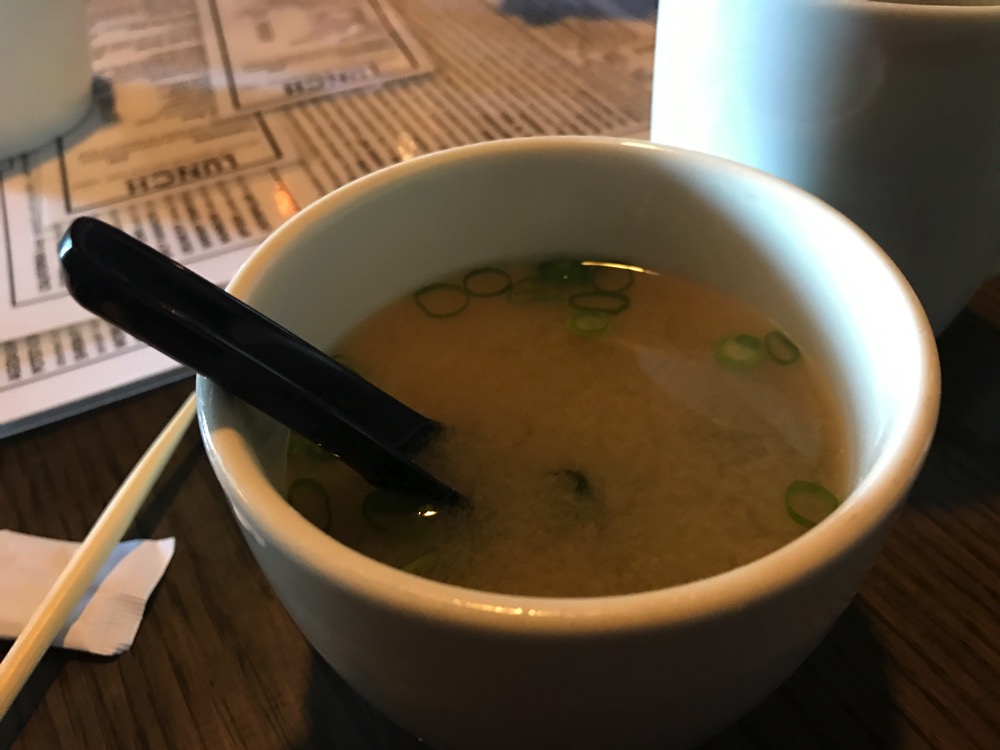 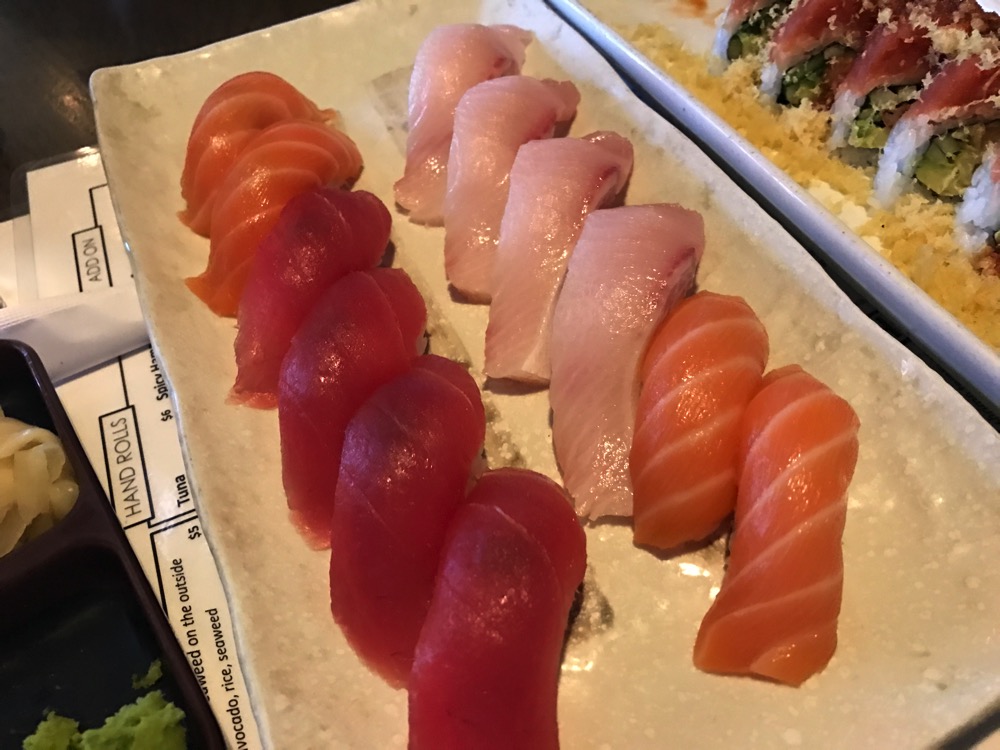 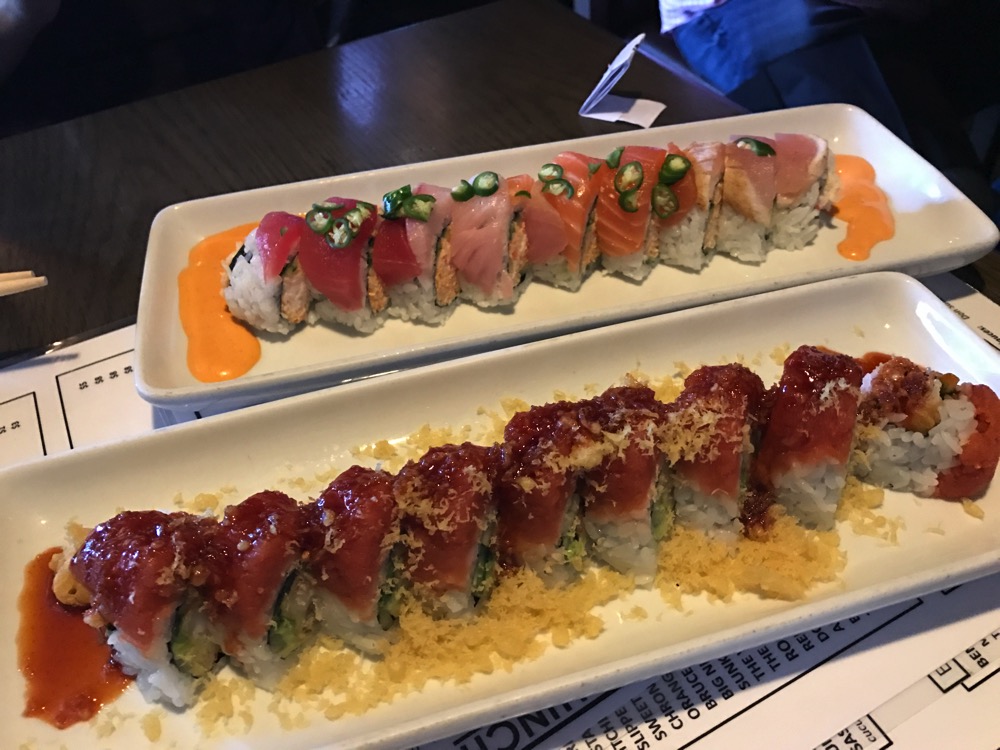 Sushi is one of my favorite meals of all time. Another once-a-weeker.

For dinner we ordered Leucadia Pizza. Instead of pizza, I had the Mediterranean Salad with Grilled Shrimp: 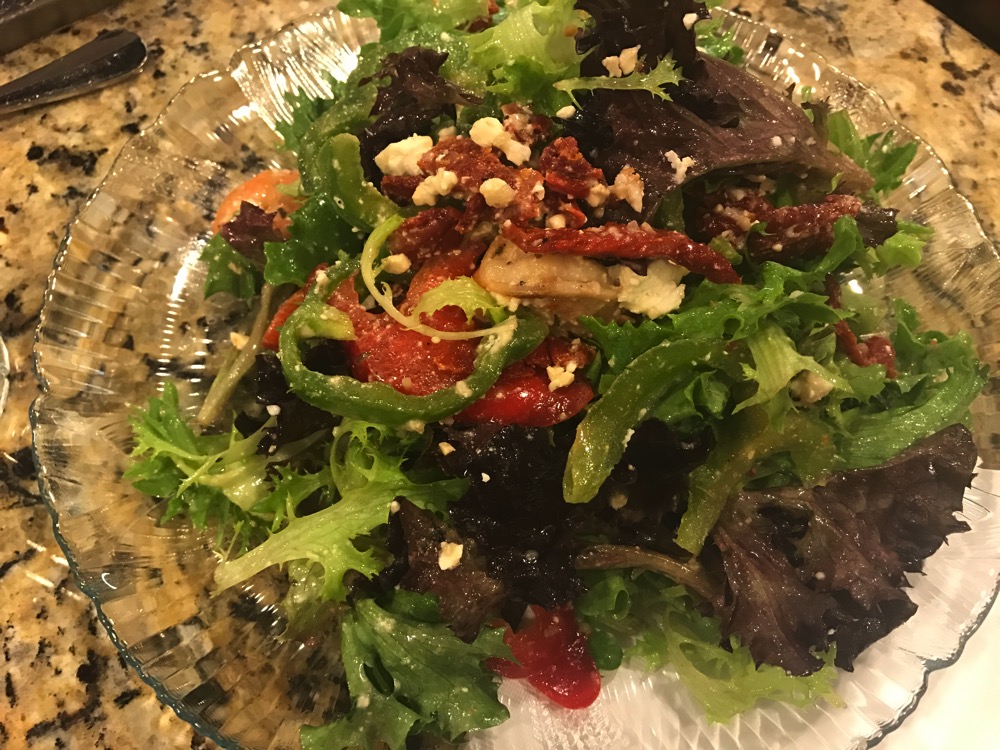 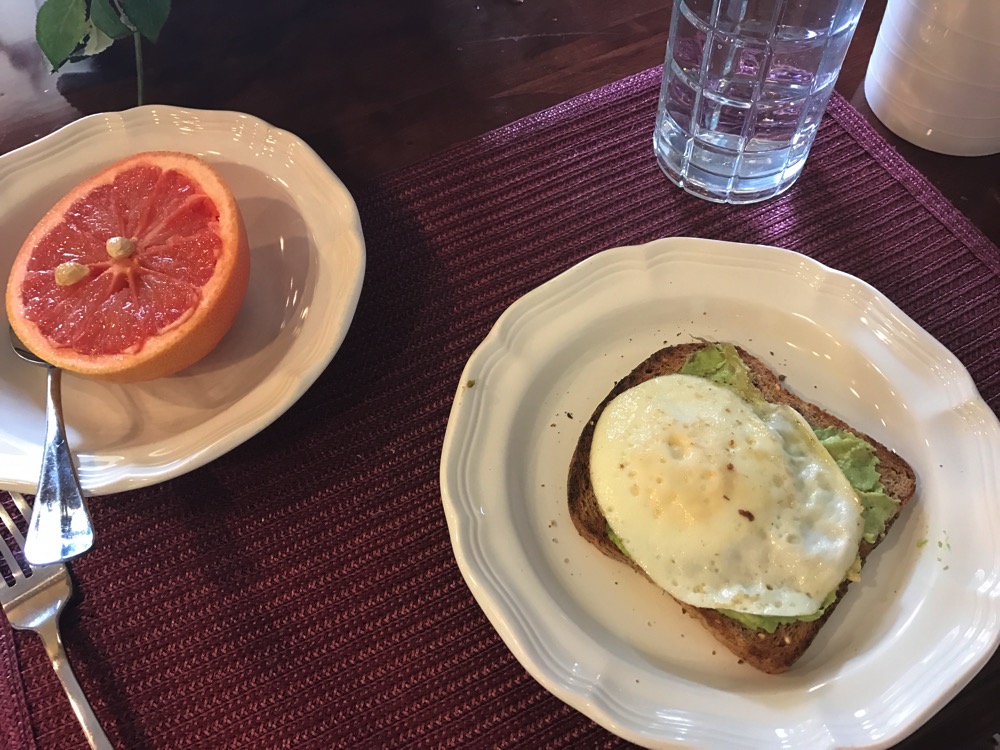 I went to the gym then ran some errands with the kids. We stopped at Souplantation for lunch. I can’t say it’s a favorite but their ranch dressing and pizza bread is pretty darn good! 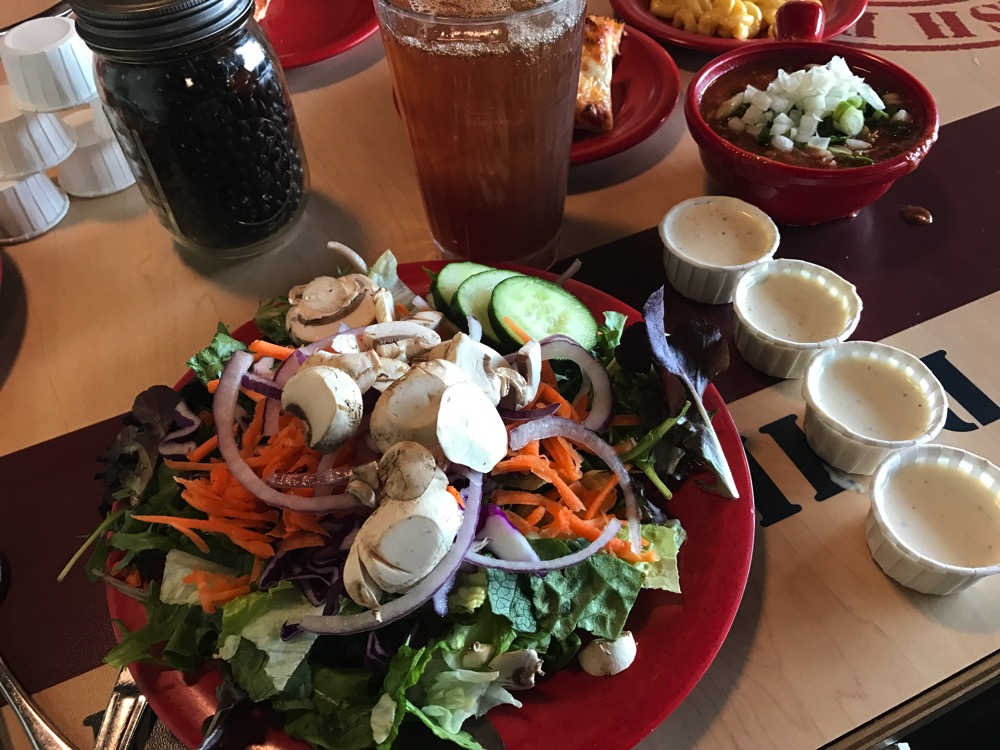 I took the kids to see the Lego Batman movie and we stopped for dinner at Mia Francesca. Again, not a favorite, but their bruschetta with goat cheese was pretty amazing! 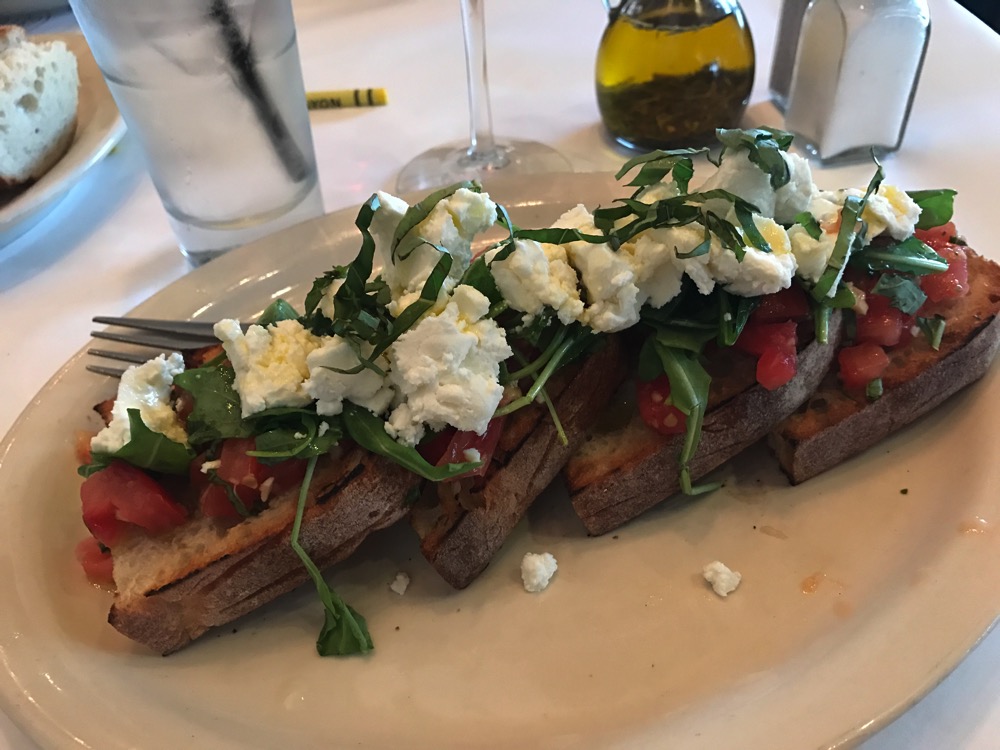 We stopped at Swirls for some frozen yogurt. Vanilla with Heath Bar bits (my favorite topping): 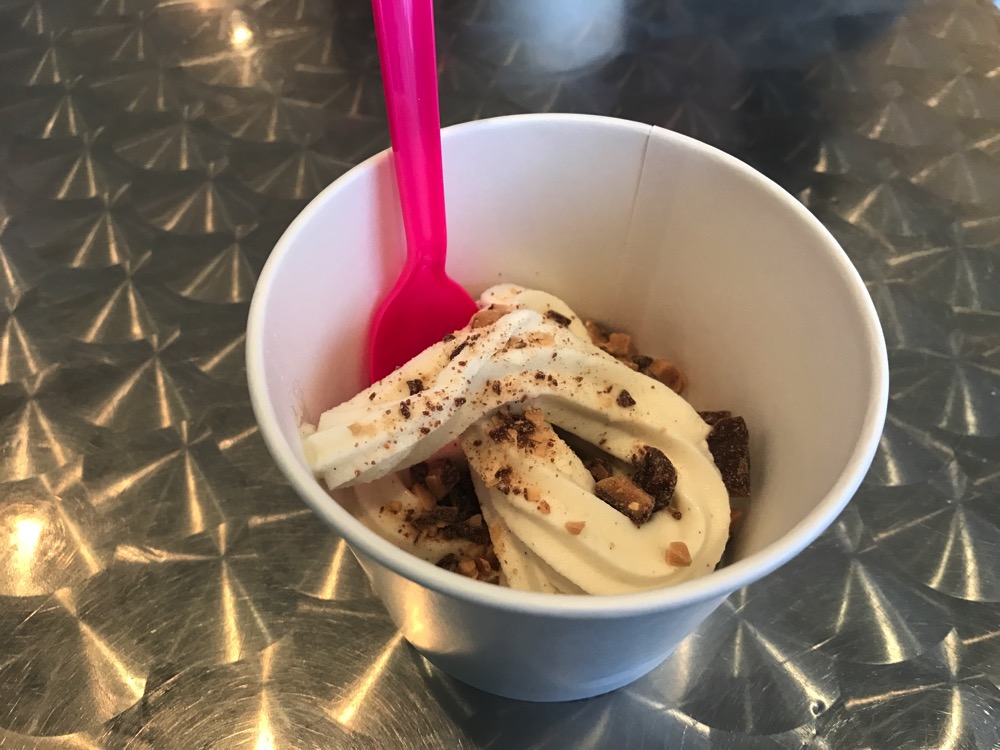 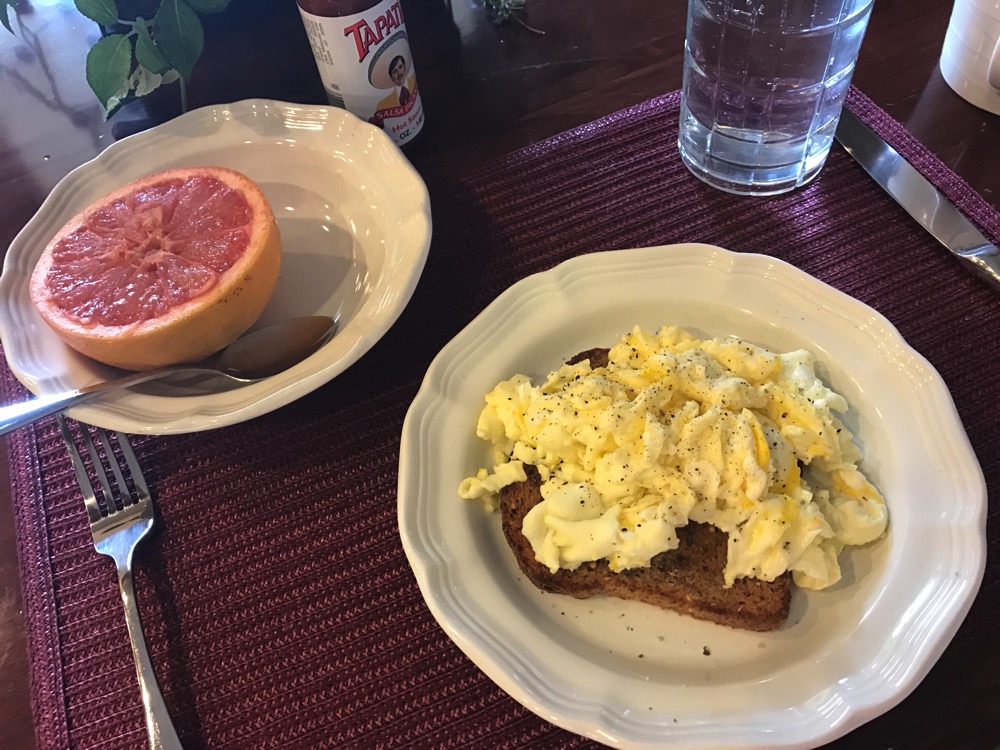 My husband and I drove to Los Angeles for a friend’s wedding. We stopped at Jersey Mike’s to grab sandwiches to eat in the car. I got the turkey provolone but didn’t get it “Mike’s Way” (with olive oil and vinegar) for it would be too messy in the car. Instead I had brown mustard which was pretty good too! 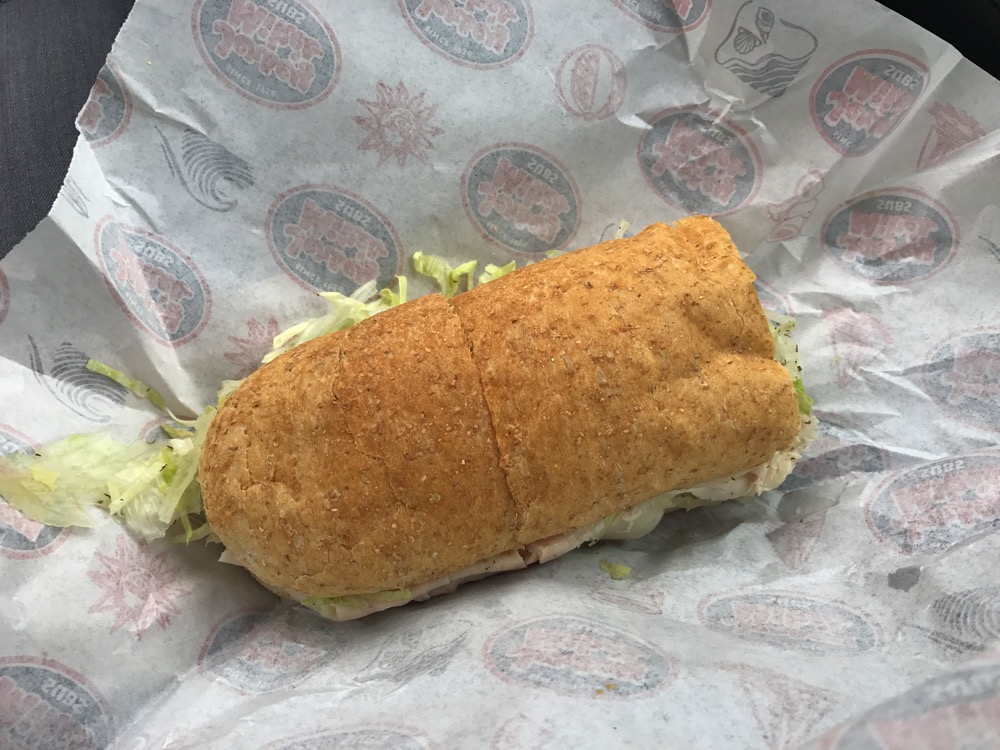 We checked into our hotel, The Beverly Hills Hotel, quickly changed and headed to the wedding. The wedding was beautiful and it was nice to catch up with some friends.

Later that evening, we had a late dinner at the Polo Lounge at our hotel. My meal started with the Celery Leek Soup: 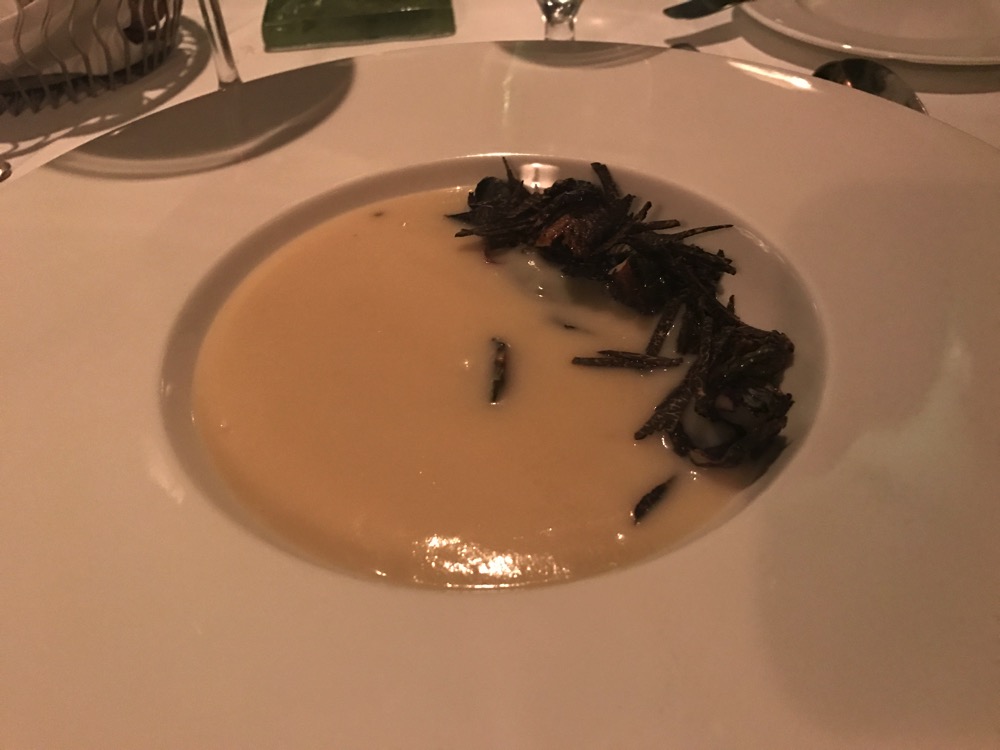 And it continued with the Steak Tartare (a favorite!): 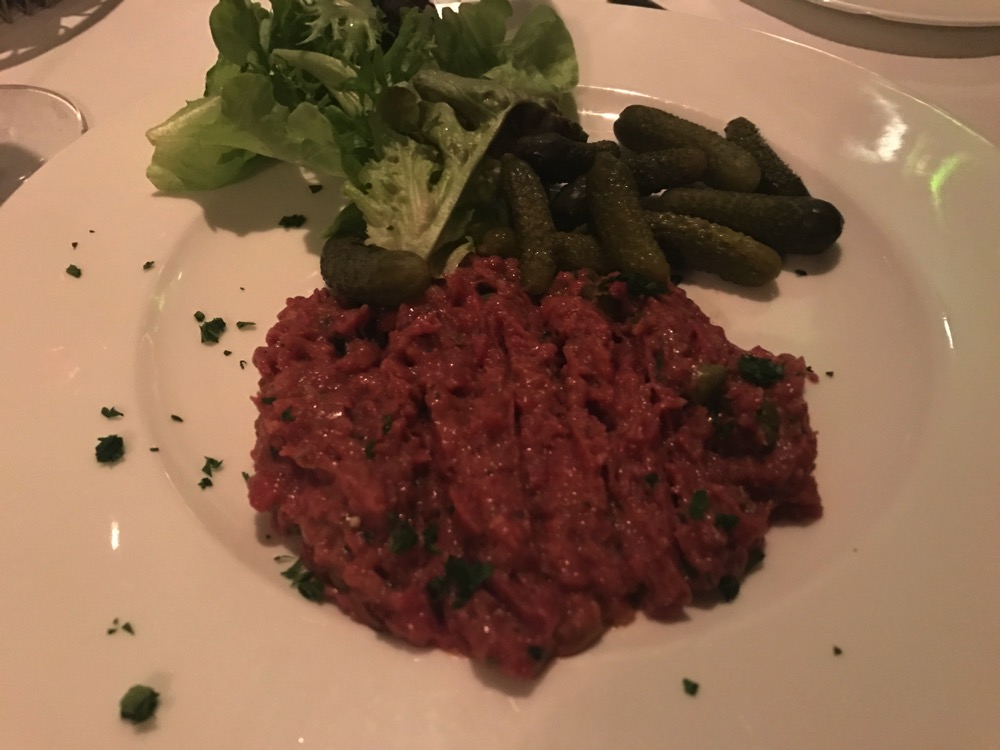 I know it looks like dog food, but it was delicious, I promise!

For dessert we had a Chocolate Butterscotch Soufflé: 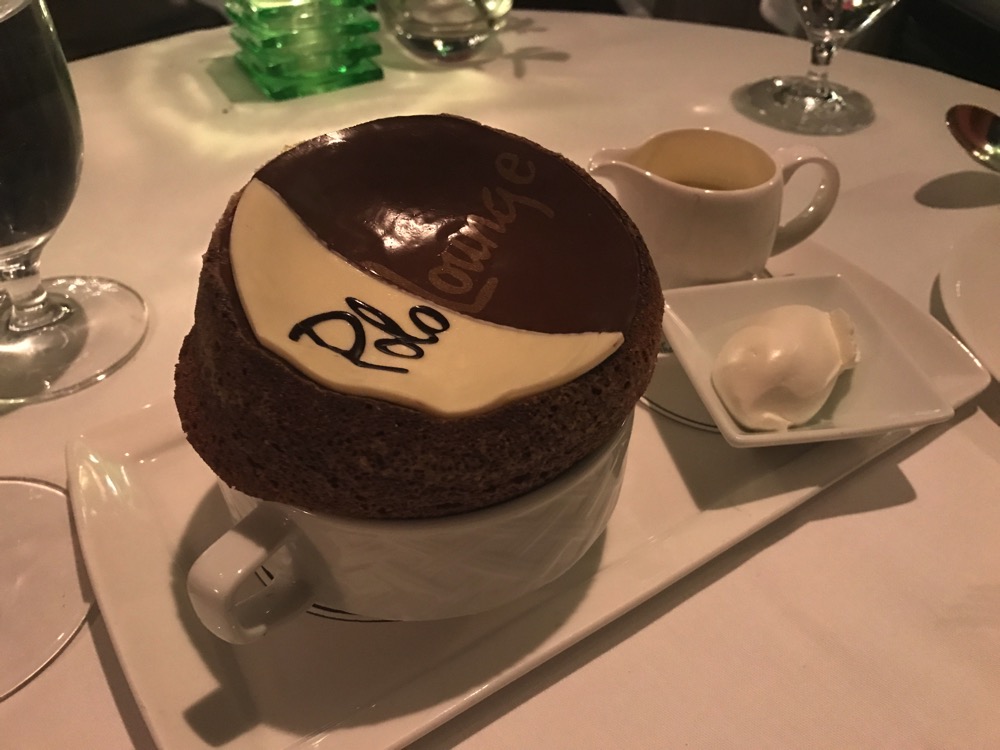 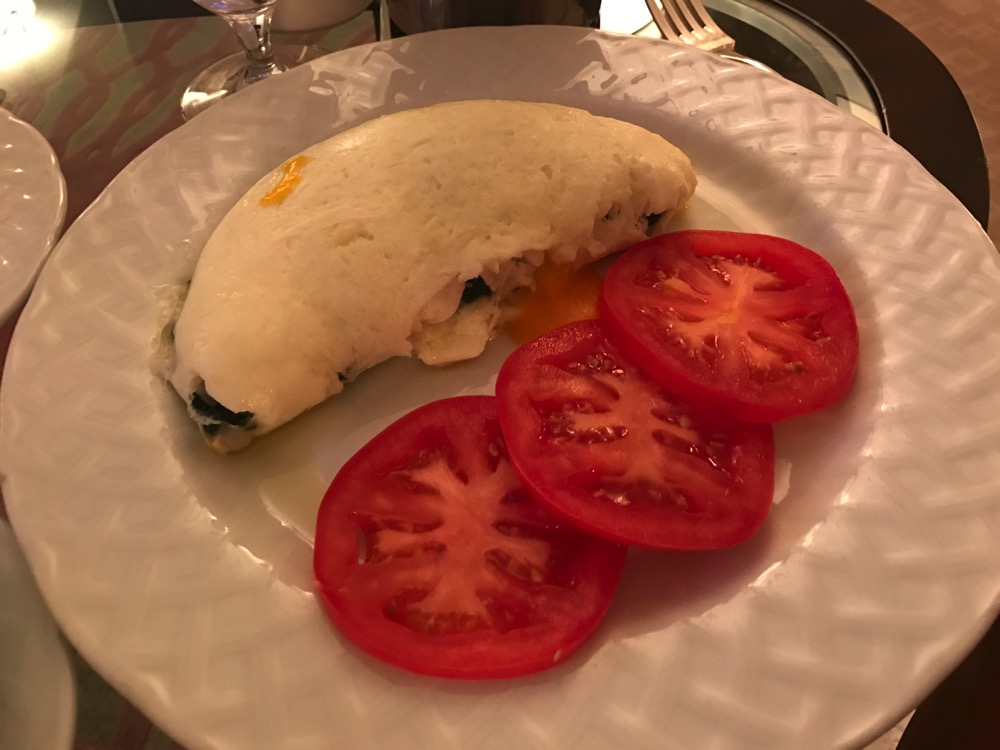 We headed back to San Diego. I hit the gym then grabbed a Salmon Quinoa bowl from the cafe at the gym before it was time to head to my son’s school baseball game. 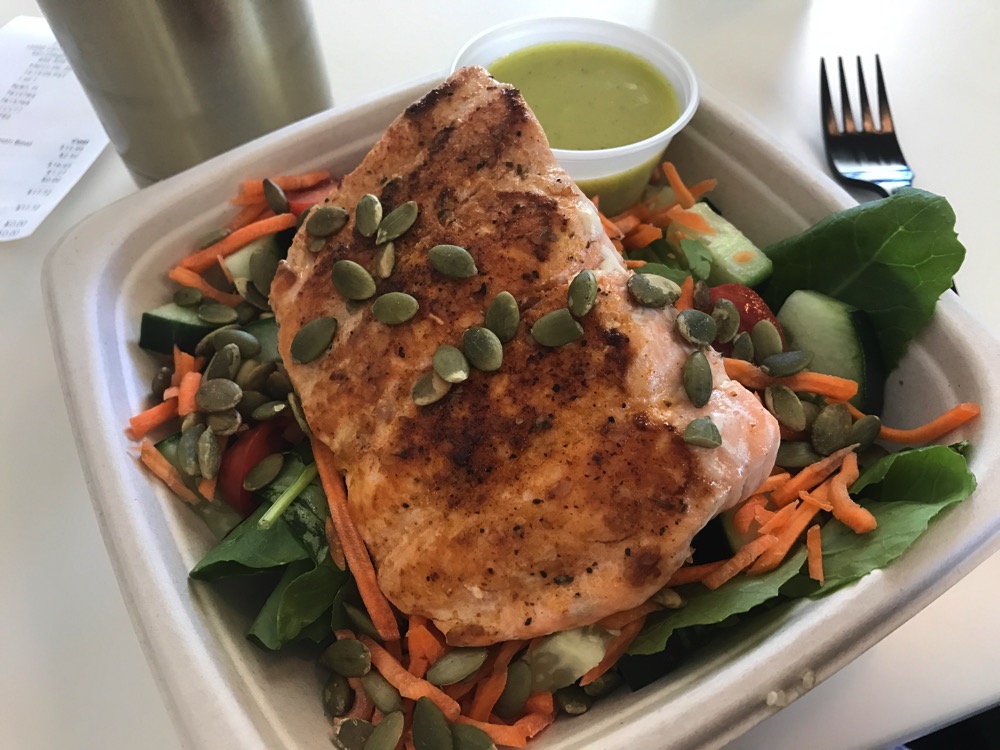 For dinner, I wasn’t super hungry so I decided on scrambled eggs on Ezekiel toast with avocado and shredded cheddar cheese. 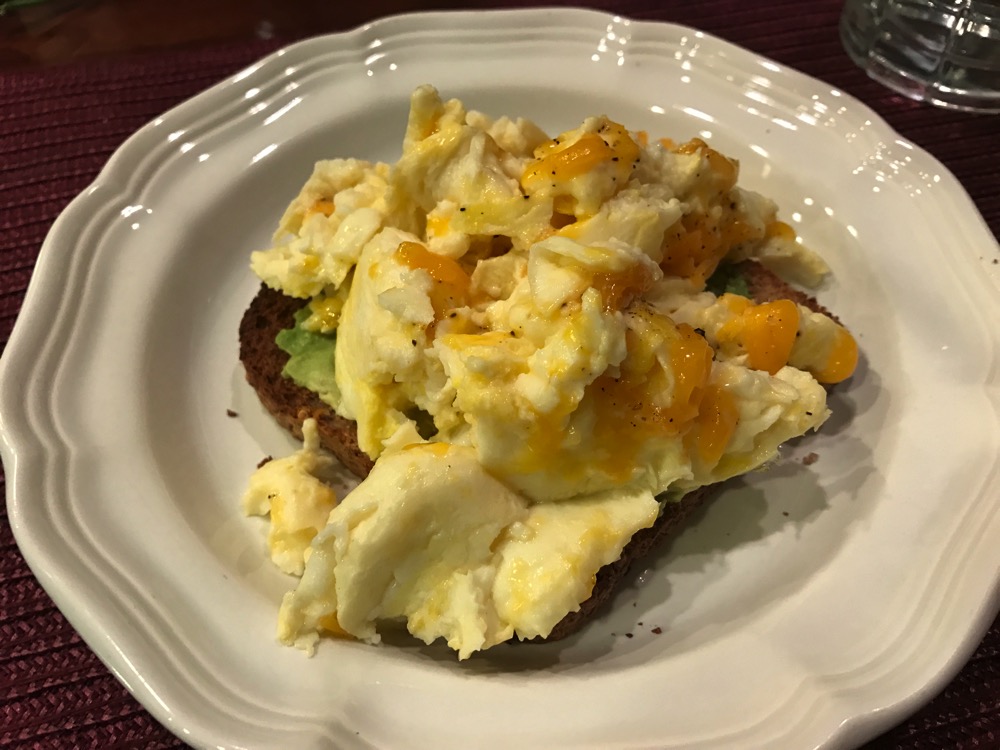 I had a meeting to go to afterwards. 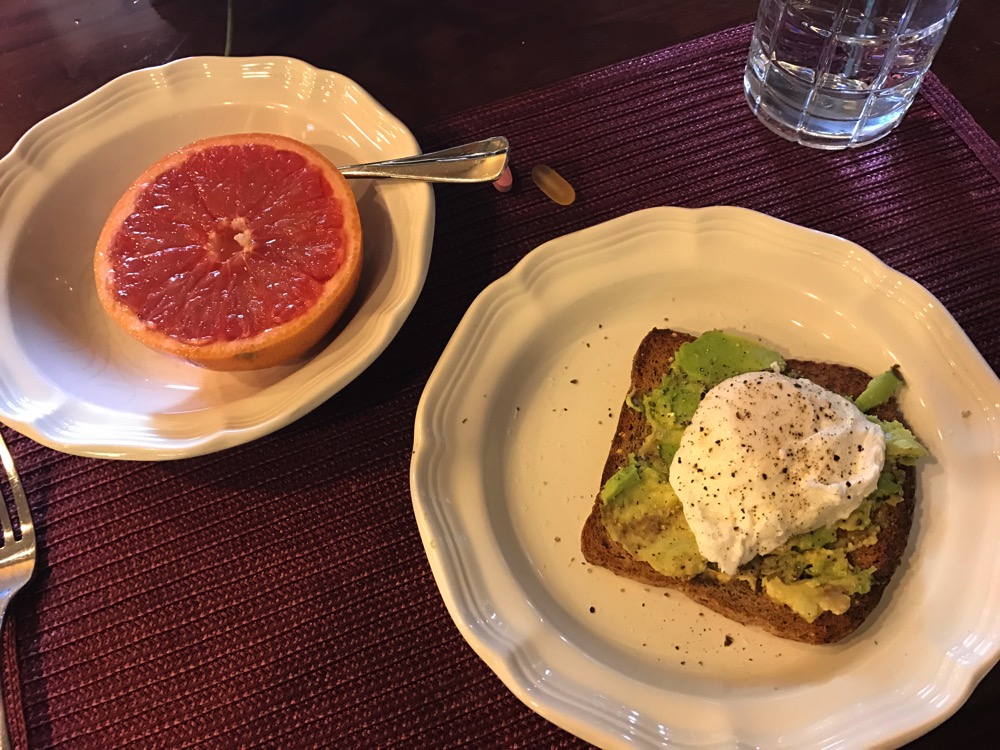 I took the kids to school, then went to the gym, followed by errands. I met a friend for lunch at Urban Plates. 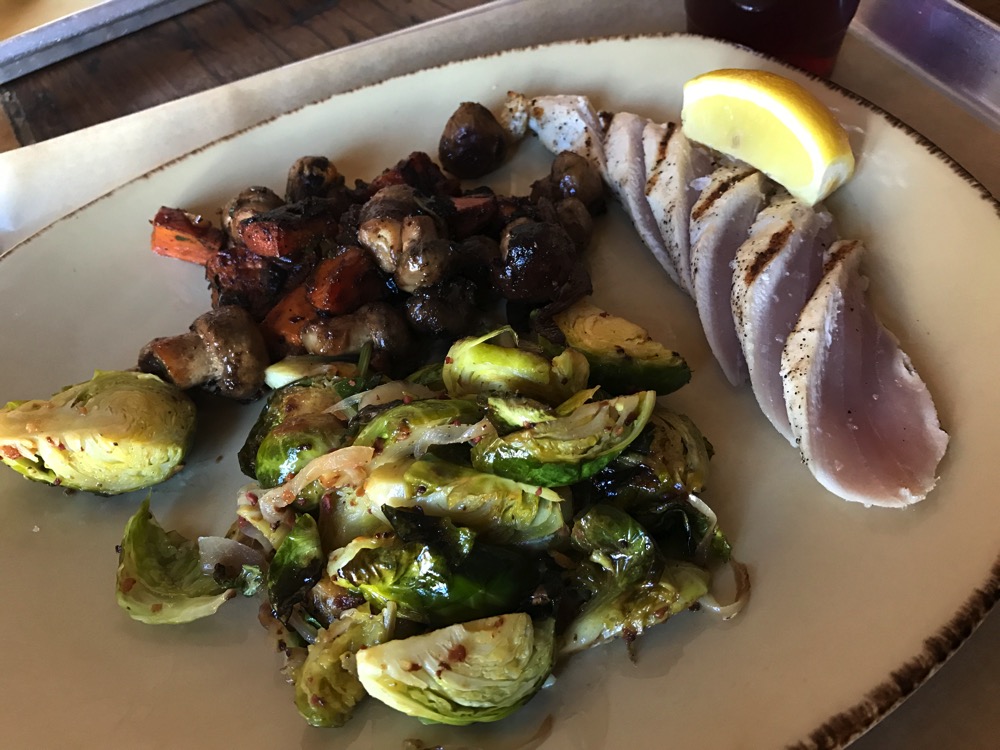 Have you had any of your favorites lately?